Industry 4.0 is the short form of what we now call the Fourth Industrial Revolution. Like the First (mechanical), Second (electrical) and Third (electronic), the Fourth Industrial Revolution (digital automation) marks a significant step forward in the way human beings manipulate the world of manufacturing and production. We are now in the age of advanced automation and cyber systems, and as a consequence, we're faced with a lot of new terms.

Most of us are familiar with the term 'smart' being used to indicate advanced technology: smartphones are already commonplace, smart homes are popular, and smart factories are just beginning to emerge. You'll also need to know about AI and big data, what a cobot is, and how to manage a smart contract. If all that seems a little daunting, this Industry 4.0 glossary will help you with some of the key terminology.

Often used to mean 3D printing, this is a process of making solid objects using 3D model data, with materials built up layer upon layer, instead of being carved or cut out of a larger source fabric.

The ability of a machine to display mental capabilities and awareness similar to the human brain, though far more advanced. In manufacturing, AI can govern applications such as advanced sensory input and response, predictive maintenance, and adaptive manufacturing, where machine learning replaces reprogramming.

A set of mathematical instructions in a finite sequence, used by computers to solve a specific problem or perform a specific task.

Instead of an artificial Virtual Reality environment, the AR headset integrates CGI (computer-generated images) with the user's real-time view of the real world. It can incorporate multiple sensory inputs, including visual, audio and touch, and is used industrially for prototyping and for intricate wiring and mechanical assemblies.

This refers to the large volume of data that can now be collected from all aspects of manufacturing or business performance, and stored for analysis. It greatly expands the capacity of organisations to plan and adapt business strategies.

A blockchain is a decentralised digital ledger that permanently stores linked blocks of cryptographically secured records, which are visible to all transacting parties.

A network of remote servers which host internet data, allowing vast data storage capacity without lots of hardware. Data is theoretically more secure, permanently available, and can be accessed anywhere.

Control of robots via cloud computing, storage and other converged applications, and internet technologies.

A collaborative robot that interacts physically with humans. It has adaptive machine learning and can work alongside humans to make the manufacturing process safer and more efficient.

The integration of physical and digital systems, fully controlled by computers.

End-to-end digital control of the supply chain, so that all processes from source to delivery are connected and controllable.

ERP is business management software that allows comprehensive control and management of data from all areas of a business. Its integrated applications collect, interpret, manage and store various data, such as cash flow, production status, payroll, purchasing and inventory management.

Fog or edge computing is the decentralisation of data resources to a space between the cloud and the data source. The amount of data uploaded to the cloud is reduced, while the distance it has to travel is less, and therefore faster and more secure.

GUI is an interface between humans and machines, which has graphical elements such as icons, windows and buttons rather than text instructions like DOS.

HMI is a means of integrating human beings into increasingly complex technological systems. HMIs can be dashboards, screens, headsets, AR glasses or wearables, and are used in many industrial, medical and military applications.

Integrated connectivity via wireless technology that controls a network of physical devices and products, such as appliances, vehicles or, as the IIoT, industrial machinery.

The compatibility of software and hardware systems so that they can communicate and exchange data.

Lights-out manufacturing refers to fully automated factories that require no human intervention and can therefore run 'without lights'.

Machine-to-machine communication, as in the IoT, where networked devices can interact and perform without human intervention.

Data that is freely available for public use, with no payment or restriction.

OEE is an assessment of equipment efficiency in the manufacturing environment.

The hardware and operating technologies that form the base on which other software and applications can be run.

The use of sensory and analytic data to predict the maintenance requirements of machines based on their performance, reducing downtime and enabling advanced ordering of components.

RFID technology is being used in manufacturing for various track and trace activities, such as asset management and personnel tracking.

Enabled by blockchain technology, smart contracts are computer protocols that can govern many transactions between parties such as vendors and purchasers. Terms are agreed and recorded on the blockchain digital ledger, and penalties for non-compliance can be built-in. Smart contracts also execute the agreed obligations and payments automatically.

A factory whose physical processes and machinery are governed by an AI system, reducing the human workforce. The machine learning systems gather big data from the connected elements, helping businesses get a better picture of how their operation is running.

A technology-driven approach to the production process which uses the IIoT to monitor and control automated operations. It incorporates data analytics to assess and improve performance.

SCADA is a distributed control system architecture. It uses various connected devices and networks, with peripheral devices that can monitor operations from various locations.

VR is a CGI of a real or imagined 3D environment which humans use to visualise or perform activities such as prototyping. 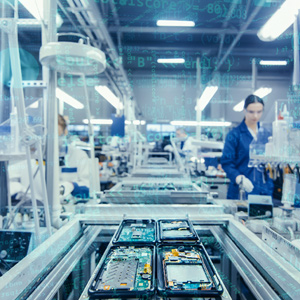 What Does Right to Repair Mean for Manufacturers? 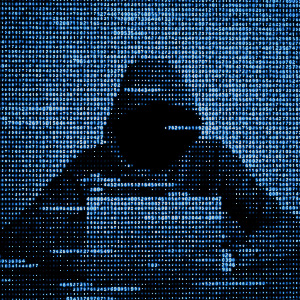 Why Is Cybersecurity Important In Factories?