Everything You Need To Know:
Terminal Blocks

Selecting the right terminal block can be as challenging and complex a process as choosing the right motor or microprocessor. They come in a wide variety of shapes and sizes, and most manufacturers or suppliers can carry thousands of different variants. At Rowse, we have many years of experience in electrical engineering design, and our Terminal Block Guide will help you choose the right one for the job.

What Are Terminal Blocks?

'Terminal blocks' is a blanket definition for the modular, insulated blocks used in electrical connections to join together or terminate two or more electrical wires. In their most basic form, they're just a long strip of individual terminals joined together. Terminals are the simplest means of connecting electrical wires, either to outlets and switches, the mains, or directly to a ground.

The body of a terminal block usually consists of a moulded copper alloy, with an expansion coefficient that matches the designated wiring. This matching coefficient is important to prevent any loosening of the connection due to differing expansion rates. It also aids in reducing any corrosion that might be caused by the electrolytic action of two different metals.

Since modern industrial applications have become so technologically advanced, and rely so much on complex electrical and electronic connections, terminal blocks are now commonly found mounted in large combinations on DIN Rails. Today you will find DIN rails almost everywhere, mounting terminal blocks for equipment ranging from the simplest circuit breaker to a complex PLC. 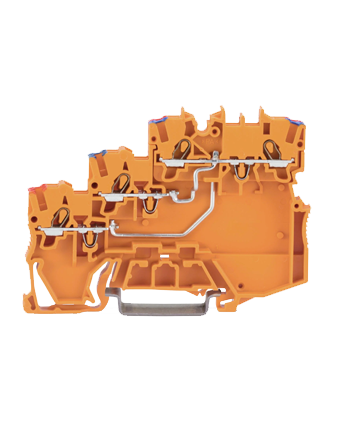 Terminal blocks are classified either by the type of device they are supporting or according to their structure. They can also vary with the type of connections that are made, including both screw-in and screw-less, spring clamp connections, and the popular modular connectors such as the push-in plug-and-socket type.

This type of structure has two ascending levels of contacts, and may use a bridge between the levels to connect them and increase circuit flexibility. This style of terminal block simplifies the wiring and saves on installation space. 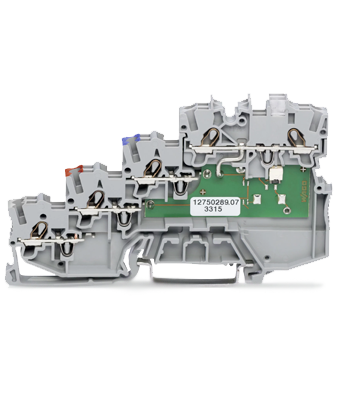 How To Choose A Terminal Block

Choosing a terminal block is a simple, step-by-step process, and depends mostly on its application use case. You will need to consider such details as termination type, contact specs, orientation, mounting and special features. The best practice method is to follow these four steps:

We have already looked at some types of terminal blocks that are available. Now you will need to determine what type is required for your designated system, e.g. screw-mounted or screw-less, single feed-through or multi-level, fuse holder, ground circuit, direct mount or disconnect.

Next you should determine the electrical specifications required for each terminal block, which will include maximum wire size, voltage and current. Wire entry sizes are usually quoted in mm² and determined by their amperage ratings. The size also depends on whether the conductor being used is solid or stranded, and also what range of conductor sizes may be included during field wiring.

Once you have made a choice between a deep or shallow block housing, then you can add the appropriate end brackets and block cover(s). You may also wish to use angled support brackets, top covers, separators, internal jumpers, test plugs and printed or blank marking tags.

Terminal blocks may also include one or more special features, such as circuit breakers, indicator lights. and lamp testing diodes. Pluggable terminal blocks are typically DIN rail mounted, and can be stacked together to save space. Such blocks combine the terminals in a way that allows the power to be disconnected from the whole stack by removing one single plug.

In order to determine the length of DIN rail you will need in your assembly, you must calculate the total density per foot of all the different types of terminal block and their respective quantities. Half an inch (½") must then be added for each rail end in order to accommodate the required rail mounting screws, plus 0.0008” (0.2 mm) additional tolerance per terminal. For the calculation to be complete, you must also add the width of the end covers, the end brackets and any separators.